City of Joy, the Cultural Capital of India and City of Palaces, Kolkata, but is the city losing all its nicknames? Is the heritage losing its worth? Many such sites are witnessed everyday but remains disregarded, many are found in ruins and many people don’t know about. These are the questions or complaints nobody can ask or make as it’s not the fault of anyone in particular. If asked, it should be asked by each individual residing in Kolkata by birth. As the name suggests City of palaces, Kolkata actually had the highest number of heritage buildings. Ten years back, the city had more than 800 heritage structures but now it has come down to only 611. The city is fast losing its heritage structures not only because of poor maintenance facility but also fractured families, pending litigation, high maintenance costs and the lack of will to preserve the past.

History has witnessed the gory act of the Black Hole of Calcutta, though now it is none other than just a mere monument lying at St. John’s Church part of old Fort William. Being read in history books and novels since childhood, this should have been the most fascinating historical place especially among the youth yet it seems neglected and not recognized. Is it because Bengalis find it as a rightful an

d proud deed as the Nawab of Bengal, Siraj ud- Daulah, held British and Anglo-Indian soldiers and civilians after the capture of the fort on 20 June 1756. Captives were held overnight in conditions so cramped, that many died from suffocation, heat exhaustion and crushing recording the death of 123 prisoners out of 146 held. Or is it the post-independence Government who kept the monument neglected?

Similarly Kolkata’s oldest existing building named after Robert Clive, the Clive House predates the man, who helped to establish the British rule in India is situated in Dumdum. The origin of the Clive House, also known as Burra Kothi, still remains a mystery. Some believe it to be a Portuguese

or a Dutch Factory. According to local legend, the mound on which the Clive House stands was built in a single night. Locals believe that the grounds and the house are haunted. After Clive, the house changed hands several times. It served as a private residence of notable Englishmen and in 1890s, it served as a headquarters of Presidency Volunteer Reserve Battalion. After independence, about 20 – 25 refugee families from East Pakistan occupied the rooms and the perip

heries of Clive House and few families continue to live in the peripheries, even after the Clive House was taken over by the Archaeological Survey of India (ASI) in 2003. Today, the Clive House is a protected monument and a blue bo

ard of ASI, at the entrance, provide the brief history. The main entrance is cordoned off, making entry impossible. The back entrance has fencing, only up to the waist level. The brave hearted and the physically fit can easily jump across it, braving the official ASI warning and ignoring chunk of masonries that can fall from the roof, but only to find the main courtyard entrance sealed to the top.

Last but not the least the ancestral home of Rabindranath Tagore, the Jorashako Rajbari which occasionally misguided to be the Jorashako Thakurbari The building is under the Rabindra Bharati University and is renovated 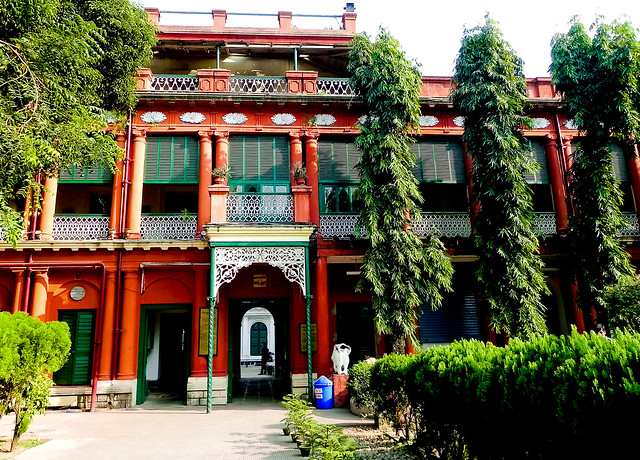 and re constructed into a museum in memory of the Thakurs, depicting how they used to live. Other countries like China and Japan have also donated a lump sum amount to reconstruct a whole new block. People from different parts of the world pay a visit every year. Regrettably, in comparison with the original home of the Thakurs which is the Rajbari just a few steps away from the Thakurbari lies in a ruined and demolishing form. According to the sources Rabindranath used the Thakurbari just for work purpose or may be stayed occasionally. Even respired his last breath. But the fact that he spent his childhood in the house is wrong. Rajbari is an exact replica of

the  Thakurbari, specially the Thakur dalan, the temple. When visited we expected it to be empty but with time it has become the shelter for many. The upstairs is occupied with people living probably from the time it got abundant, which in Bengal we say jobor dakhal, taken by force. Off course free of cost. They eventually have given the downstairs rooms for rent. Not only the middle class but the Rajbari has been a shelter for the poor and street dwellers as well. The Thakur Dalan is occupied by them. The Thakurs were known to be kind hearted all their lives. They have also been so even after their inexistence. Why is the discrimination between the two houses, just because the Thakurbari is under the Rabindra Bharati University and the aids provided by the different countries or is the high maintenance cost and neglect by the descendants? Heritage is a rich cultural legacy inherited by us which should be restored and presented as a proud masterpiece to the tourists for which Kolkata got its culture and name from. If not restored by municipality or government we ourselves should contribute a little to refurbish these heritage sites.